A Walkthrough of the History of UK Roofing

High-quality roofing has always been necessary for houses in the UK to provide shelter from the harsh weather. Most people used whatever materials were available locally. Thatch, clay and slate are among the most iconic of the historic roofing materials. Read on for a quick walkthrough of UK roofing history. 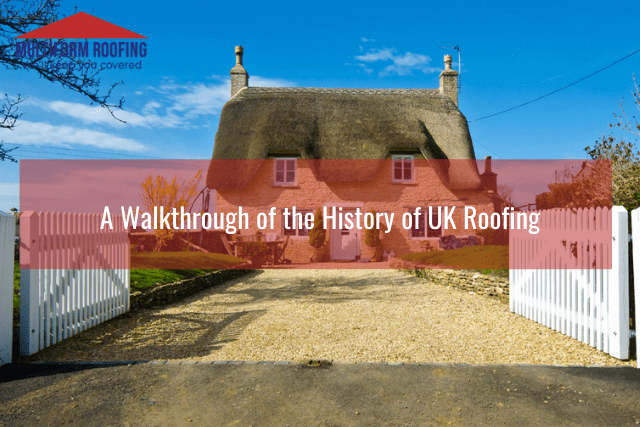 Thatched roofs are among the most iconic roofing styles and are usually associated with rustic, old-fashioned buildings. Unlike other materials which were in limited supply depending on a building’s location, thatch materials were widely grown and available almost everywhere. Thatch’s greatest weakness was its flammability, and when the Great Fire of London burned down most of the city in 1666 thatched roofs were subsequently banned in the city.

In Wales and Scotland, slate has remained as a common roofing material for centuries. Slate is a hard, brittle substance that easily splits into flat sheets that are perfect for use as tiles. Skilled manufacturers can produce vast quantities of slate tiles in a relatively short space of time. However, since slate tiles are not perfectly uniform, slate roofs are more vulnerable to leaks.

Clay tiles were first introduced to the UK when the Romans invaded England in the 1st century AD. After the Roman Empire fell and during the Dark Ages, the art of making clay roofing tiles disappeared. Clay only became a popular choice for roofs again around the 12th or 13th centuries.

During the 20th century, concrete rose in popularity as a roofing material. Tiles made from concrete are almost always uniform and do not suffer from issues with frost or leaks like clay tiles. However, concrete is a heavy material and has fallen out of fashion as a roofing choice.

Aside from tiles, concrete is also commonly used in buildings with flat roofing that were common during the second half of the 20th century, though modern materials now offer superior alternatives.

While some people prefer historic roofing materials, each comes with its fair share of issues. Thatch is expensive and hard to maintain, slate is prone to leaks, clay has frost issues, and concrete weighs a lot and is unfashionable. Multiform Roofing offers a variety of modern solutions that look as good as traditional materials but have none of the weaknesses.