What Are the Advantages of Using Sheet Roofing Over Slab Roofing?

There are many types of roofs which will be used to accommodate the needs of commercial and residential properties. Two of the most common are sheet roofs and slab roofs. While these might appear similar from a grammatical point of view, there are a handful of important differences. Why does sheet roofing often represent the most viable solution and what benefits can you expect to leverage? 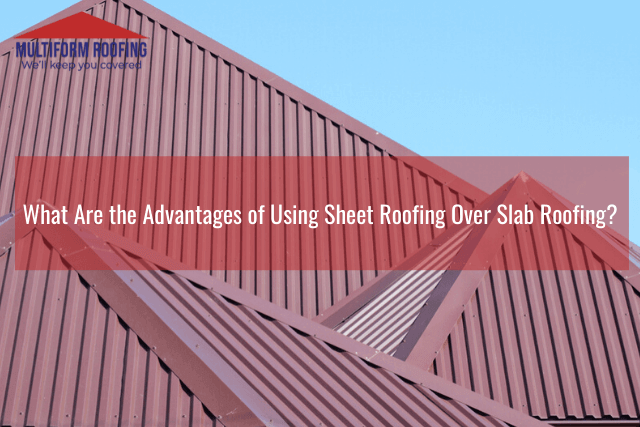 Addressing the Concept of Dead Loads

The “dead load” of a structure refers to its total weight. It is therefore obvious that homes and businesses associated with higher dead loads will require more structural reinforcement in order to remain safe.

Due to the sheer mass of slab roofs, additional elements such as beams and joists will likely be needed. This inevitably results in higher material costs and in many cases, a large project will take longer to complete. Sheet roofs such as those engineered by Multiform Roofing are not subject to these drawbacks.

The Issue of Flexibility

Another lesser-known issue associated with slab roofs is that they represent permanent fixtures within a structure. In other words, they cannot be moved or modified. This also holds true if you happen to encounter a serious problem (such as extensive chimney repairs).

Even if it is possible to access the slab roof, the project itself will be extremely complicated and costly. Sheet roofs can be easily modified, repaired or even replaced if necessary. This is why they are often chosen over their static slab counterparts.

While there are indeed times when slab roofing may be appropriate, it is still impossible to deny the benefits attributed to sheet roofing. If you would like to learn more about the options at your disposal, it is a good idea to speak with one of the specialists from our team.